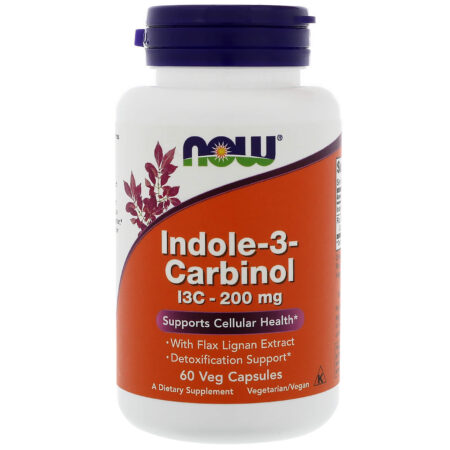 Cruciferous vegetables (cabbage, broccoli, cauliflower, etc.) are uniquely abundant in a sulfur-containing compound called Indole-3-Carbinol (I3C). In the acidic stomach environment, I3C is readily converted into DIM (diindolemethane) plus a full spectrum of additional compounds shown to neutralize free radicals and promote proper detoxification. Studies have shown that I3C supplementation can help maintain the health of the breast and other reproductive organs. Until recently, because of the typical instability of I3C, isolated DIM was the best substitute available, but NOW® Indole-3-Carbinol packaging ensures stability and potency during its shelf life.

Caution: For adults only. Consult physician if pregnant/nursing, taking medication, or have a medical condition. This product may cause digestive upset in some sensitive individuals. If you experience any gastrointestinal discomfort after using this product, reduce dosage or discontinue use. Keep out of reach of children.

Do Not Eat Freshness Packet. Keep in Bottle.

Store in a cool, dry place after opening.

It is often stated that Indole 3 Carbinol is found in cruciferous vegetables (the cabbage family). Strictly speaking, this is not true. Actually, the natural compound found there is Indole 3 glucosinolate (I3G), which is found in good concentrations in broccoli, kale, cabbage, bok choi, brussels sprouts, cauliflower and even turnip. I3G has minimal anti-cancer activity but upon cutting, mastication or light cooking, an enzyme (called myrosinase) is released in the vegetables and this converts indole 3 glucosinolate to indole 3 carbinol. A mass of research now indicates that the latter has significant anti-cancer properties.

Indole 3 Carbinol (I3C) is a member of the glucosinolates family. This group of compounds contains other indoles and also isothiocyanates, such as sulphoraphane. These are known antioxidants and natural detoxifying enzymes. Sulphoraphanes have also been shown to have strong anti-cancer properties.

The first recorded use of the bioactive natural compounds in cruciferous vegetables was the recommendation of Cato the Elder, a Roman Statesman around 200 BC, who wrote that, If a cancerous ulcer appears on the breast, apply a crushed cabbage leaf and it will make it well.

Between 1990 and the current time, there have been over 120 peer-reviewed scientific studies on indole 3 carbinol with cancers such as breast cancer, prostate cancer, cervical cancer and even respiratory tract cancers. For example, in one (albeit small) double blind study on women with cervical cancer, supplementation of 200 mgs to 400 mgs of I3C reversed the early stages of cancer in 8 of the 17 women. I3C is potent stuff.

So what does it actually do?

First, a caveat. I3C is unstable and much of it converts in the intestine to its metabolites Diindolymethane (DIM) and indole carbazole (ICZ). I3C, DIM and ICZ are all absorbed into the bloodstream and any or all could be active, separately or in conjunction, in the real world.

Indeed there is an increasing amount of research on DIM for a Cancer Watch report on the latest studies. Some cancer experts believe that DIM has by far the strongest properties and is easier to use as a controlled-dose supplement. Blood levels may be pre-determined more accurately with DIM whereas I3C ingestion or supplementation may see inconsistent levels of I3C in the blood stream as it is broken down.

I3C and/or DIM seem to work at a number of levels and in several ways on cells and tissues.

They are antioxidants, neutralising free-radicals. According to research covered in Cancer Watch, they can inhibit the negative action of the HPV virus, restrict carcinogenic aflatoxins and prevent them causing certain cancers. They can also denature dangerous chemicals called dioxins and prevent them from causing DNA damage.

This is applicable in male and female cancers such as breast and prostate.

From this short summary it is easy to see why pharmaceutical companies are so excited – but you can eat the cruciferous vegetable (but it is essential to avoid overcooking) or supplement with I3C, DIM, or both.

A by-product of I3C in the body inhibits smooth muscle proliferation and would therefore inhibit some heart and artery wall problems.

I3C has been shown in research to inhibit the action of some aflatoxins, which are carcinogenic. It also prevents aflatoxin-induced liver cancer, leukaemia and colon cancer.

I3C can reduce, and even reverse, breast tumour growth

In cell cultures, I3C inhibits human papilloma virus (HPV) proliferation, and the development of cysts and pre-cancerous lesions. There is some evidence that I3C may help prevent recurrences of respiratory papillomatosis.

Further research indicates that I3C may well protect your liver, but the most interesting aspect of I3C is its seeming ability to reduce, even reverse, oestrogen-driven tumour growth. The Roman was right!

What is Indole-3-Carbinol used for?

Indole-3-Carbinol can be used for a range of health issues. Besides being taken to balance out hormonal levels, assist in detoxing or perhaps just as a general health boost, it can be used to treat:

Cancer: A study conducted in Haifa, Israel at the Israel Institute of Technology investigated the use of I3C on mice as a preventative as well as a therapeutic treatment for cancer. Injected directly into the prostate tumour, it hindered the growth. It was found to regulate genes that played a significant role in the control of cell cycle, cell proliferation and signal transduction.

Although more studies are being conducted worldwide to include a spectrum of factors, Indole-3-Carbinol was found to impede estrogen receptors in breast membranes, reducing the risk of breast cancer.

There is a repair protein known as BRCA that prevent damaged genetic DNA being passed to the next generation. Faulty BRCA genes increase the risk of developing cancers. As low amounts of BRCA are seen in cancer cells, it is suggested that higher levels of BRCA will prevent further growth. It is proposed that Indole-3-Carbinol will assist in boosting this repair protein.

The studies that are currently being undertaken include assessing I3C in conjunction with various illnesses including Lymphoma and Leukemia. Please seek advice from your doctor for further information regarding Indolei-3-Carbinol to treat cancer.

Laryngeal papillomatosis: This is a tumour, caused by a virus, inside the voice box. It can also be used to treat tumours in the respiratory tract.

Cervical dysplasia:This is a condition where there are abnormal cells on the surface of the cervix. It is a precancerous condition thats most commonly found in sexually active women under the age of 30. Symptoms are not obvious and prognosis is often discovered after a Pap test. If left untreated, the risk of developing cervical cancer heightens.

Systemic lupus erythematosus (SLE): Also known as lupus, this autoimmune disease is characterised by severe fatigue, joint pain, headaches, anaemia, facial rash and blood clots. This disease attacks certain parts of the body in alternative phases, which generally allows affected people to live a normal life. SLE is not curative and the aim is to relieve the symptoms through diet and lifestyle choices. Taking Indole-3-Carbinol may support cellular reproduction and assist in detoxifying the body.

Vulvar intraepithelial neoplasia: A trial conducted in the United Kingdom assessed women who suffered this disease and were randomized to receive 200 and 400mg of Indole-3-Carbinol. It was found there was no difference between those who consumed 200mg and those who consumed 400mg. Nevertheless it proved to be successful with lesion size and severity dramatically reduced with a better symptomatology and vulvoscopic appearance however the vulval areas with the most traumas did not improve.